The most recent Erickson Merkel Foundation fundraiser blew the previous two out of the water. But first, credit where it is due.

Mary Anton, Tyson Bittner, Jared Klempel, Marnie Piehl, Mike Renner, and Carly Retterath made the EMF North Dakota Team’s 3rd Annual Fundraiser a monumental success! The event lands on the second week/weekend of September, which has historically been the weekend in Bismarck/Mandan for garage/rummage sales. Coinciding with the United Tribes Technical College International Powwow, tens of thousands of people hit the residential streets to find what treasures they can on what is likely more folding tables than most people have ever seen.

When the N.D. Team held our first sale in 2016, we had about eight households donate their unwanted household items to us – ranging from toys to wall hangings, electronics, clothing (bags and bags and bags of it) and everything else that a person might have in their home. Those eight households netted us roughly $650 or so, which wasn’t bad for the first outing. Last year, the number of households who donated items doubled, and we were fortunate enough to raise between $1,000 and $1,100 – enough for one full scholarship. 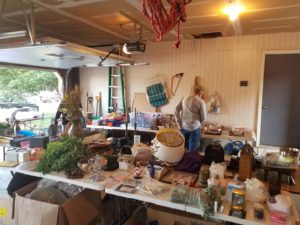 This year’s event kinda began in the spring, when we started soliciting our friends, family and co-workers as they were doing their own spring cleaning. From then until this past Saturday, we received at least 15 households’ worth of donations, or enough household items to fill my large SUV up 10 times. Thanks to a phenomenal idea by Mary and Carly, we extended our “Bag Sale” idea as well. Last year we had offered customers the opportunity to buy a garbage bag for $5 and fill it with as many clothing items as possible on the Sunday of the sale. This year, we offered a grocery bag for $5 on Saturday for clothing only, then dropped the price on the grocery bag to $2 on Sunday and again offered the 13-gallon garbage bag for $5. We also said “If you can fit it in the bag, you can have it.”

It was a huge hit, and kept the weekend moving quickly. Our only complaint was sore feet and backs from standing on the cement garage floor/driveway for 12 hours each day. But, that all paid off when we counted our funds last night and found out that we’d raised…

So, we were able to grow by 40-50% from last year, thanks to the tireless efforts of our N.D. Team and everyone who donated their household items. Plus, now I get my garage and shed back, so that’s a nice bonus as well. 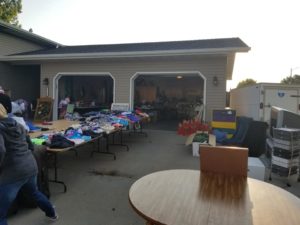 Once it was said and done, those 10 full SUV loads turned into about one and a half. The clothing, kitchen items and toys that didn’t sell will be given to Community Action, a public not-for-profit in Bismarck that provides clothing to impoverished households. The remaining few boxes will get packed back into the shed to collect dust through the next year until we bring it out again next September (which I really don’t want to think about, yet).

Thanks to all my team here, and to all the households that donated to this sale. You just helped fund another scholarship (and a half)! And, thanks to some last-minute sign printing and placement, we raised more awareness about our mission.

p.s. We once again placed Bigfoot outside on the lawn to serve as a point of interest and to brand our event. Not only did it get more offers than any other item (sadly no one made the magic offer of $1,000), but it served as a selfie magnet and surprised the heck out of a few dogs!